The HPV questions have resolved. There were 52 questions (one for each state) plus six cluster questions and one question about the nation (see trends graph below).

The state questions asked, “What will be the 2013 estimated vaccination coverage of HPV for females aged 13-17 in the state of <State name>.”

State HPV vaccination likely is dependent on the cluster to which the state belongs. We asked forecasters to help to fill in the conditional probability forecasts by using the “Related Forecasts” section after a forecast on the cluster question.

The six cluster questions were:

Read this in-depth blog post for more information about the cluster analysis for the HPV-related questions on SciCast.

The national question, What percentage of the US female population aged 13-17 will be vaccinated against HPV by the end of 2013? has resolved.  Nationally, the rate was 57.3%. Read the CDC report.

The Brier Score for a uniform distribution forecast “UBS” was 0.6. Our raw market Brier Score (before smoothing or adjustments) was .762. 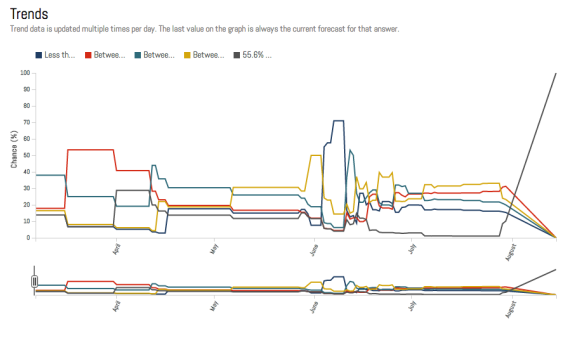 The above trend graph is for the question, What percentage of the US female population aged 13-17 will be vaccinated against HPV by the end of 2013?

For the six cluster questions, the average Brier Score for a uniform distribution forecast “UBS” was .372. Our raw market average Brier Score (before smoothing or adjustments) was .392. Visit the HPV Resolved Questions spreadsheet to see all data related to these questions.

Note that Q546 had no one other than administrators trade on it. Nevertheless, after removing admin trades our score is the same as the uniform score: 0.619.

The Brier Score (Brier 1950) measures the accuracy of probabilistic predictions. Lower is better.  For dates, counts, and other ordered questions, we use the related Ranked Probability Score (Gneiting & Raftery 2007).  Both range from 0 to 2 and we report them together as Briers. On a binary question, a 50-50 forecast yields a Brier of 0.5.

2) Over all of these questions, we had only six conditional forecasts, other than those from admin to set up the basic relations among nation, clusters, and states. Still, the state questions on which we performed worse linked to the cluster questions on which we performed worse, so the relations held. That is, our Brier scores were typically worse than those of “no confidence” forecasts on states with historically “somewhat low” and “very low” vaccination rates and on the clusters to which they belonged.

3) Another pattern is that there was some “regression to the mean” so that many states in the “very high” and “very low” vaccination rate clusters, based on the previous three years of data, moved toward the national average in 2013.

There were 53 participants’ comments for the HPV state questions. Here are a few:

I feel like population of a state matters when deciding and predicting these statistics. This is due to more populated states get priority on vaccines and less populated states only get occasional vaccines. Every state has vaccines but sometimes vaccines are only offered certain times of the year, such as flu shots.

Looking at previous data for 2010 and 2012 for the US Virgin Islands’ vaccination for females between the age range stated, I see in 2010 22.5% for 1 shot, whereas in 2012, the most recent data, was 28.7%. This would suggest an upwards trend, and there should be noticeable improvement once again in 2013. This follows the same trend as all of the United States, where there is shown to be improvement in the # of females between 13-17 getting at least 1 HPV shot.

There’s not that many vaccination centers in Idaho but those that do have the vaccine will most likely be in big cities such as Boise and maybe even Sandpoint.

@Miku: You don’t necessarily need a vaccination centre, all you need is a general practitioner, or more normally just a nurse. I think the uptake rates of this vaccine depends much more on factors other than convenience, specifically awareness, and cultural and religious questions.

Louisiana has shown a recent downtrend from 2011 to 2012 of 0.9% decrease from the previous year. However, in 2010, the % of females who were vaccinated held into 2011, but only recently dropped in 2012. Can anyone perhaps provide more explanation for this downtrend?

The general trend over time has been that more and more girls within the age range of 13 to 17 have been getting vaccinated as of recent years, but there has been no evidence that this year will experience a greater increase compared to any other year. I do not recall, nor can I find any info of any recent campaigns that were rolled out within the last year that have had significant effect in terms of educating the public, but, as with the trend dictates for Texas, there should be an increase nevertheless. http://www.ncsl.org/research/health/hpv-vaccine-state-legislation-and-statutes.aspx#2013-2014 chart The link shows that Texas has not instigated any recent legislation to help enforce vaccination. The increase is most likely significant, but not incredible.

13 thoughts on “HPV questions have resolved on SciCast”