The question, What West African country will be third to detect the Ebola Virus in 2014 after Guinea and Liberia? has resolved as Sierra Leone, with a Brier score of 0.87, slightly better than baseline 0.93. For more information, view this post on the CDC web site. 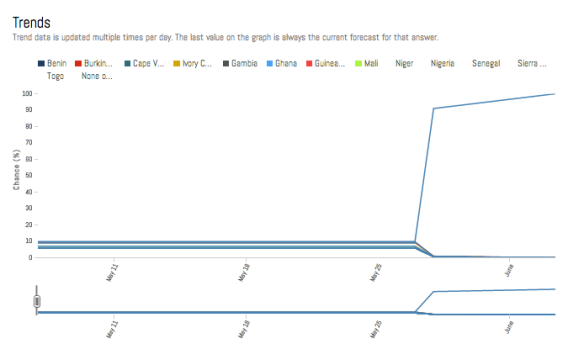 The Brier Score (Brier 1950) is a measurement of the accuracy of probabilistic predictions. As a distance metric, a lower score is better than a higher score.  The market Brier Score ranges from 0 to 2, and is the sum of the squared differences between the individual forecasts and the outcome weighted by how long the forecasts were on the market. On a binary (Yes/No) question, simply guessing 50% all the time yields a “no courage” score of 0.5.

There were 17 forecasts made by 3 unique users.

There were 5 participants’ comments. Here are a couple:

Check out this related forecasting question that is still active on the market.

Share on FacebookShare on TwitterShare on Google+Share on Linkedin
0+

One thought on “Ebola question has resolved”